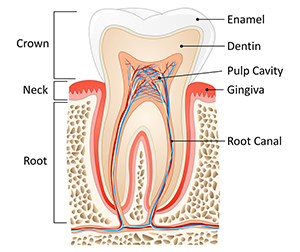 The new study involves patients enrolled by 62 dentists, including 46 general dentists and 16 endodontists. Most of the dentists are in the US, although some are from Norway and Sweden.

The researchers got data from a total of 655 patients between the ages of 19 and 70 who had endodontic treatment for a tooth. Almost all the teeth (89%) were posterior teeth.

The study also revealed that people were able to return to normal activities basically immediately after their root canal. In the week before their procedure, patients reported that on average they were in pain about half the time 3.6 days, whereas in the recovery week they were in pain only an average of 2.1 days.

You Should Look Forward to a Root Canal

Ideally, no one should need a root canal, and we work hard to achieve that with our CariFree treatments, but if you have an infected tooth you shouldn’t worry about your root canal. Instead, you should look forward to it and the relief it will bring. If you still find yourself beset by anxiety about it, sedation dentistry can help you relax to have your root canal done.

If you suspect you might need a root canal and are looking for a caring, compassionate Las Vegas dentist, please call (702) 873-0324 for an appointment at the office of Dr. James B. Polley.