Iron Age Jawbone a Reminder Not to Use Teeth as Tools 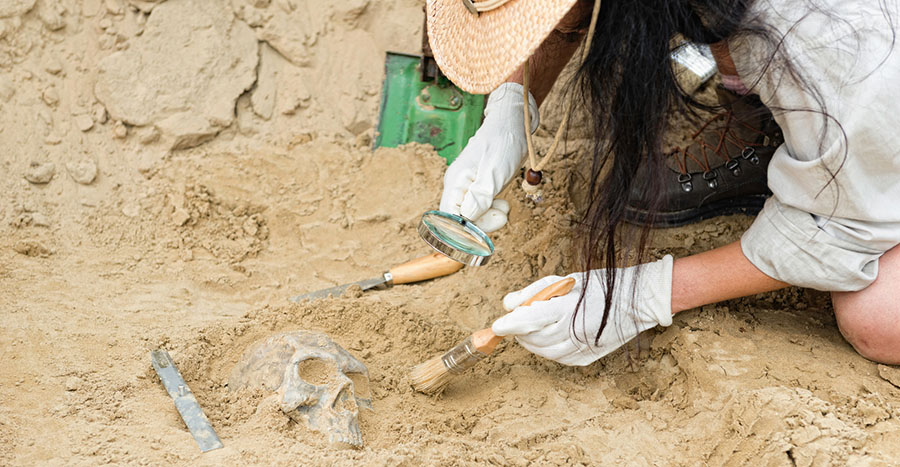 But it’s hard to imagine a more graphic demonstration of this than a recently-discovered jawbone dating from the Iron Age in Scotland.

The jawbone contains just two teeth, and researchers suspect it was his work that cost him the rest of them.

The Age of the Brochs

This jawbone was found in the remains of a broch. These large round stone structures were the largest structures built in Britain during the prehistoric period. The buildings could be up to 50 feet high and about the same wide. These impressive dry stone buildings–built without mortar–were probably intended simply to look intimidating and grand. Although they may have had some value for defense, it seems unlikely that they were designed for prolonged periods of defense against a concentrated attack.

Brochs were built in Scotland from about 600 BC to 100 AD. Our exemplary gentleman comes from the latter end of that period or later, about 120 AD to 240 AD.

The remains were found in a carved whalebone vessel inside the broch. Analysis of his bones showed that he ate a lot of fish, which was unusual for the period. His reliance on fish protein may have been caused by his lack of teeth, which left him unable to eat meat.

The man was also very advanced in age, at least 50, but possibly much older, even by decades.

Over the course of this long life, the man had badly damaged his teeth. He lost all but two of his teeth, and bone had grown over the sockets of all the lost teeth. His two remaining teeth were badly worn down.

Researchers suspect that the bad wear in his teeth was due to using his teeth as a third hand to tightly clamp materials like grasses and straw for weaving them into bags and other containers. Of course, it’s also possible that the wear on his teeth was related to the grain that people ate in the settlement. All grain was milled with sandstone, and it was naturally mixed with many grains of sand, making it damaging to the teeth.

The placement of his remains was highly unusual. The vessel carved from a whalebone vertebra also contained red deer antlers and what researchers said was a thoughtful assemblage of objects. They said that, based on his age and the placement of his jawbone, this man was likely a very prestigious individual.

After his death, it seems, people filled the entire broch with debris and abandoned the settlement. Possibly, this man was the figure that held this settlement together, and his death represented the end of the age of brochs.

Preserve Your Teeth for a Lifetime

It was common for people in the Iron Age to use their teeth as a vise while scraping hides or weaving baskets. This habit and their rough diet led to the destruction of their teeth, even over the course of a relatively short lifetime.

Modern people have access to many more tools, so we don’t have to use our teeth as tools in the course of our daily work. And while there are problems with our refined diet (such as high levels of sugar, salt, and fat), it’s much easier on our teeth. As a result, we are able to preserve our teeth for a lifetime, even if we live 80, 90 years or more. Even if a tooth is damaged or lost, reconstructive dentistry like dental crowns or dental implants can be used to repair or replace it.

If you are looking for a Las Vegas dentist to help preserve your teeth for life, please call (702) 873-0324 today for an appointment at the office of Dr. James B. Polley.