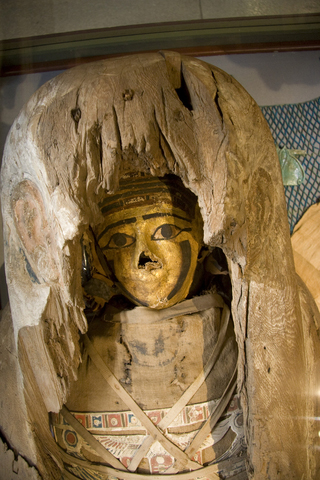 Researchers have recently diagnosed the oldest case of heart disease. They say that 3500 years ago, a rich Egyptian who worked as a keeper of the stables in the ancient Egyptian city of Luxor had very bad gum disease, and this contributed to a hardening of his arteries, then heart disease and death.

Finding Heart Disease in a Mummy

You might wonder how experts could diagnose heart disease in a mummy. Well, it’s not easy, but it has been done a few times.

The next part is harder, because researchers have to find telltale evidence of heart disease, which shows up in the organs. But because the Egyptians removed the organs and placed them in canopic jars, the organs can’t normally be scanned.

In this case, though, the canopic jars had been broken by the tomb robbers who pillaged most of the man’s burial treasures. This allowed researchers to scan the organs, especially the lungs, which show telltale markers of heart disease. They found that the lungs had the small aggregates of cells related to pulmonary oedema, typically seen in heart failure patients.

This heart disease, researchers said, was related to the extremely poor state of his dental health. He had very bad gum disease, including several abscesses (pus-filled sores) on his gums.

Not an Uncommon Problem

This is not the first time that heart disease has been diagnosed in Egyptian mummies. Several other mummies have been shown to have the condition, and it’s likely related to the prevalence of poor dental health among the Egyptians. About 90% of mummies show significant dental wear, often penetrating past the enamel into the dentin. They didn’t suffer very many cavities, though, because their teeth wore away faster than cavities could develop. Tooth wear often reached the pulp, which lead to infected teeth that couldn’t be treated because they didn’t have root canals. At best, the tooth could be extracted.

What they did suffer from was gum disease. About 18% of Egyptian mummies had severe gum disease, about 2-3 times as much as among modern Americans. And this likely contributed to a high level of heart disease, as bacteria from the gums enter the bloodstream and builds up in the heart and arteries, contributing to clogged arteries and heart failure.

If you want to live like a pharaoh without dying like an Egyptian, good oral health care is essential. If you’re looking for a dentist in Las Vegas, please call (702) 873-0324 for an appointment at the office of Dr. James B. Polley.