For years, people suspicious of modern Western medicine have taken aim at many of the tools of the trade in dentistry and other areas of medicine. Water fluoridation is a high-profile target, but there are many other less prominent attacks on traditional dental remedies, including mouthwash.

Part of the attack is trying to offer up supposedly safer alternatives, including herbal mouthwashes. But do these alternatives work, or are people who use them setting themselves up for tooth decay, gum disease, and worse? 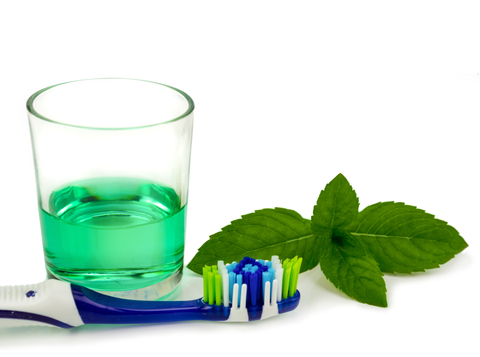 What Are Mouthwashes for?

To be able to judge the effectiveness of herbal mouthwashes, we have to first talk about the purpose of a mouthwash. Although many people use a mouthwash to attempt to cover bad breath, this is not the optimal use. Other people may use mouthwash as a substitute for flossing. This is also not an optimal use.

The optimal goal for a mouthwash is to improve an oral hygiene regimen that already includes brushing and flossing. Brushing and flossing are used to remove much of the food debris and bacterial biofilm (plaque) that accumulates on teeth. A mouthwash, then, is used to further remove debris and kill bacteria that remain in the mouth. Once the biofilms have been disrupted, the bacterial population should be exposed and vulnerable, allowing a mouthwash to kill them more easily.

This will reduce the bacterial population in the mouth, and slow its regrowth. It will also help to eliminate bad breath as it’s the bacteria–especially bacteria in hard-to-reach places–that lead to bad breath.

Other studies have suggested that regular use of mouthwash containing alcohol could be linked with a higher risk of oral cancer. Some have disputed this link, and the scientific evidence is far from clear, but some people worry about this link.

In addition, the alcohol in mouthwash may contribute to dehydration of the mouth, which can actually make the mouth a more hospitable place for bacteria to grow.

So Do Herbal Mouthwashes Work?

There has not been enough research to establish for certain whether herbal mouthwashes are as effective as other mouthwashes. But the current evidence suggests that yes, they are effective. In touting their product, the Dental Herb Company points out a 2007 study that compared their Tooth & Gum Tonic to chlorhexidine rinse, showing that there was no statistical difference between the two rinses in terms of gingival index. There was a noticeable difference in terms of plaque index, with chlorhexidine being much more effective at reducing plaque. Since this research was supported by the Dental Herb Company, we have to consider it plausible but not definitive.

Independent research seems to support this conclusion. A 2014 study showed that both chlorhexidine and herbal mouthwashes were more effective than saline at reducing plaque, but the difference between the two was not statistically significant. A 2016 review of studies showed that, of 11 relevant studies, five were inconclusive, two favored herbal mouthwashes, and four favored chlorhexidine.

Given the lower impact that herbal rinses have on the body, they might be a better choice for daily use unless you have been prescribed a chlorhexidine rinse.

Do you have more questions about how best to maintain your oral health? Please call (702) 873-0324 today for an appointment with Las Vegas dentist Dr. James B. Polley.